I was training with my personal trainer, Natalie, and I mentioned ice-cream.  Now, for her, that's like a red flag to a bull.  And I eat a LOT of ice-cream.  (It's soy ice-cream, btw.)
"Didn't you try those smoothie recipes that I sent you?"

"I eat smoothies for BREAKFAST."

I brought out my big guns.  "Do you know how many calories there are in ice-cream?  I need those calories!"

Natalie thought about it.  "You could have TWO smoothies."

"Natalie, in order to make up for the calories in ice-cream, I would need to be on a smoothie DRIP."

Some of the kids at work are Jewish, and some of them are kosher, in varying degrees.  Eloise is vegetarian at work, so that she doesn't mix milk and meat or have ham/pork/bacon accidentally.

And it was the main day of passover.

Keeping kosher, that one is.
2 comments:
Labels: Children

Well, the compliments keep on coming my way.  What can I say?  I'm popular with the under 8 crowd (and a few over 8s...)

From Bailey:
Randomly, while making play-dough:
"Sam, you're the thinnest," (in a VERY approving voice)


It helps working in an industry where everyone is addicted to chocolate.
No comments:
Labels: Children, True Conversations

I'll Look Out for You

Again in the three year old room (I had these kids as toddlers, and then last year they were in PK, one of the rooms where I get to hang out a lot, so a lot of these kids are MY SPECIAL KIDS).

Luke is fascinated with maps.  He can ID Australia, the Australian flag, and " 'Ganda where Sam's children live" (Uganda), and the Ugandan flag, and the UK flag.  Plus a few others.

But the concepts haven't all quite sunk in...

"Sam, do you live in Australia?"

Excuse the watermarks!  I couldn't work out how to buy the downloads, so I did the dodgy thing and printscreened them all.  I did buy 2 hard copies though! 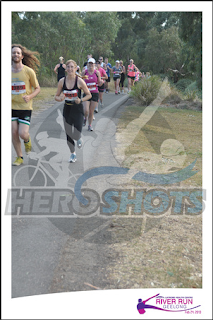 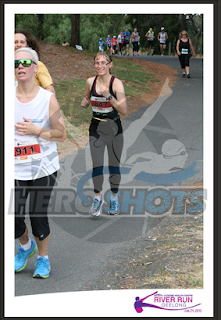 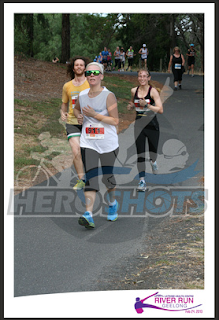 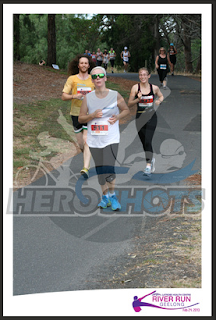 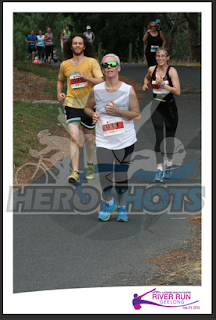 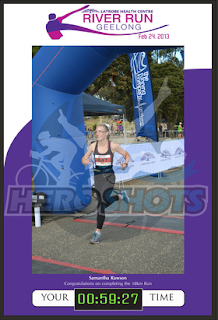 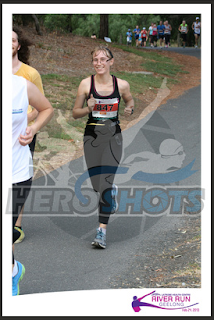 Yay for me running and not looking hideous!  Hope you all enjoy the photos!
1 comment:
Labels: Running

On the 24th, I ran my first ever 10km!  One of my friends, Alex, ran the race with me, which was fun, (even if he beat me and made it look easy, which is clearly not okay and not fair).

I crossed the line at EXACTLY 1 hour, making my net time (finish time minus the time it took me to actually cross the starting line) 59:27, which is actually not bad!  (I finished 293 overall, 125 in my gender, and 34th in my category.)

On a side note, there was a guy who ran the WHOLE THING dressed in a complete BATMAN outfit!  Mask, cape, the lot

Alex and I ran together for the first 7km.  Alex had previously said that he "wasn't at all competative" and that he "was just there to support me".  Which was true until he realised that it was GREAT FUN to overtake people.  So after the 2nd km, he started doing that pretty much the entire time.  So I was trying to keep up, and he just kept on overtaking people.

At 7km, I told him I needed a walk break.  I said that he could either walk with me, or keep going.  He kept going, nad overtook a whole bunch of people up to 8km.  Then he decided it was even more fun to help me overtake people, so he RAN BACK and made me re-overtake all those people he'd overtaken and then ran back past.

But it was fun.

I'm doing a half marathon in May, in Sydney, to raise money for prem babies (I was born prem!)

I'll post some of the photos that the professional potographers took of us soon... once I'm organsised enough to actually get them!  I don't look too bad for someone running / has just finished 10km.  I'll post them soon!
No comments:
Labels: Running

Somehow, that Doesn't Surprise Me...

So, I was with the three year olds, when Rohan came up to me and told me excitedly, "My birthday's coming up!  It's in July!"

"That's great Rohan!" I said.  "My birthday's coming up too, in June.  That's just a little before yours!"

Alex looked thoughtful, then said very seriously, "My birthday's coming up, in Pluto."

I'm just surprised he's the only kid from another planet.
No comments:
Labels: Children, True Conversations 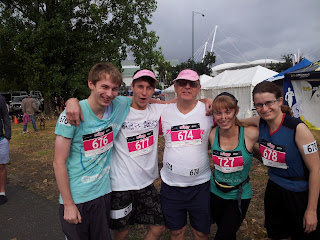 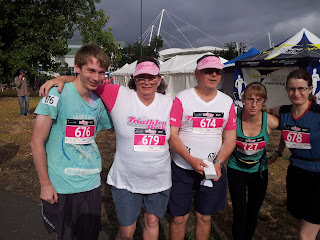 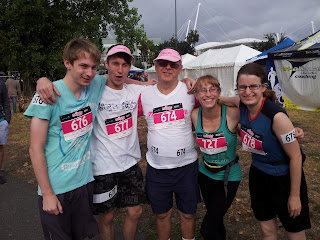 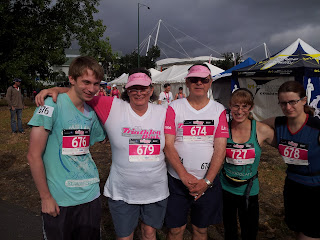 John-Wayne, Mum or Robert (I'm sure you can work out who is who), Dad, me, and Julie. 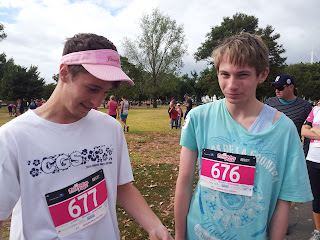 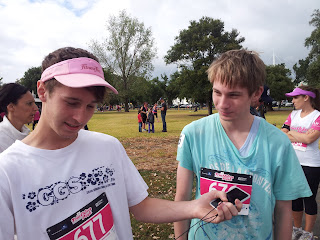 Robert and John-Wayne.  The buff one in the family, and the skinny one whose training plan involved a detailed diet. 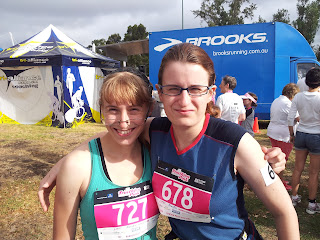 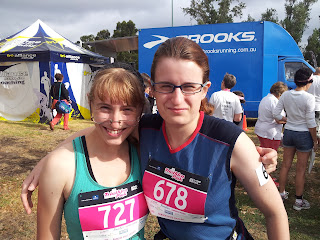 Me and Julie.  I am older, even tough I don't look it.
Interesting notes from seeing these pictures:
- My glasses fall down A LOT.  I need new ones, and should just use these ones for work.
- I'm amazed at how tiny I am.  Not just skinny, though there is that, but short and just all round... tiny.  I always knew that I was small, but this is something else.  Especially when you consider that no one in my family is really large.
I'm running my next race on the 24th, and it's 10km.  Alex has volunteered to run this with me, so hopefully we'll get photos.  It's the River Run Geelong, in case anyone wants to either sign up or rock up and support us.

I was at personal training, and was doing some push-ups.  Obviously, being a girl, my upper body strength is not the greatest, and I was doing them on my knees, same as usual.  Natalie (my trainer) decided that it wasn't hard enough, and I needed to do full ones.

Afterwards, she told me I was never allowed to do knee push-ups again.  (which I do, but I try to mix in some full ones too.)

Natalie looked at me.  "I can't believe you've been holding out on me with CHIN-UPS."


(And, in mad terror that I will have to do a million of them in future sessions, I am practicing some more, and have since done 10 in a row without falling off the bar!  Yay for Sam!)
No comments:
Labels: True Conversations 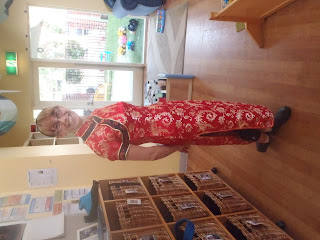 Yes, it's sideways.  Suck it up.  My internet skills suck.
But I got to wear this to WORK (which is where I am in the sideways photo), which is always nice, because I don't like having to wear black.
On an even brighter note... Wesley people will recognise this because it was my year 10 formal dress!  That's right, I brought and wore this dress when I was 16 (bought in China).  I still fit, though it IS tighter around the hips... which is probably a good thing, especially as I only weight 40kg in year 10.
No comments:
Older Posts Home
Subscribe to: Posts (Atom)

Sam-Is-Mad
I'm 28 years old, I'm a born-again Christian, and currently work as a childcare worker. I'm a Pentacostal, meaning I believe in the active power of the Holy Spirit in the world; and I'm a Quiverfull Christian, meaning that I believe that children are a blessing from God - and why would you want to limit blessings? I'm interested in a whole lot of things, including drawing, knitting, and reading (which I do a lot of!).

People Who Love Me